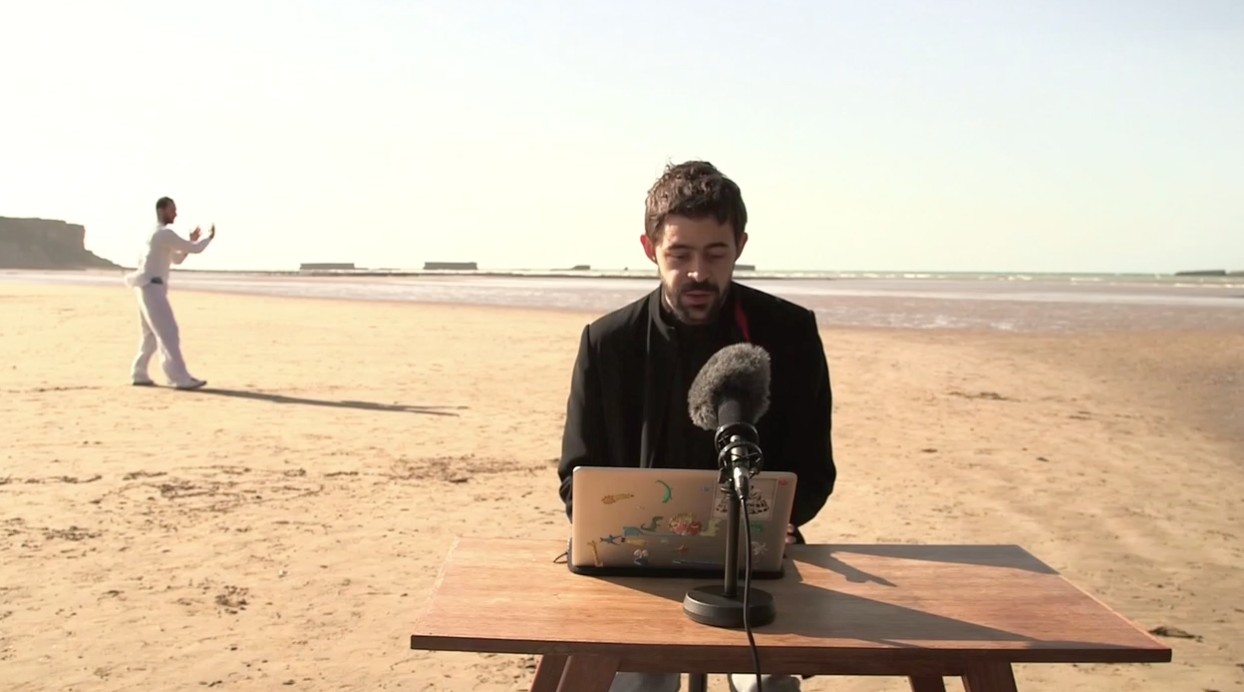 The Interconferences are a series of video interventions filmed  in Normandy in 2014 by Benjamin Efrati. Intended for a film presenting his work at the Salon de Montrouge 2014, the Interconferences are philosophical and humorous micro-videos inserted between other video works, allowing the viewer to understand the links between very different types of content: self-filming, animation, music video, lecture-performance.

Derived from analytical philosophy, Benjamin Efrati’s methodology adopts an aberrant dialectic: stemming from traditional questioning of truth (elusive visions of Lautréamont in mind, avant-garde movements of the 20th century, literary madmen like Jean-Pierre Brisset. ..), his lectures combine definitions of tangible concepts with those of current but hitherto unjustified phenomena (beauty and the notion of “cabbage”; unreason and the policy of banning tobacco …). In distorted lessons, logical and linguistic errors are transiently essential rules.
This pedagogy is more readily developed within the collective, in this case Miracle, of which he is one of the founders. In a 2013 research project entitled Theory of Dissolution, Gallien Déjean explains: “Collective practice, we hear, is the ideal space where the essential elements of avant-garde radicalism persist: dissolution of the authoritarian posture of the author and fetishism of the work of art for the benefit of a political and societal commitment (a position embodied by the SI); creation of an alternative identity that subverts the traditional figure of the artist and the institutions that surround him by relying on an ironic strategy that endorses the attributes of the entrepreneurial structure. “. Benjamin Efrati indeed launches the impulse of an alternative movement with Miracle, which moreover presents the recognizable characteristics of this joint identity construction: use of its own lexical field, iconographic abundance, musical experiments, organization of more or less events. less legal etc. The plurality of proposals allows the group to effectively justify the aesthetic insolence of their projects, among other subversions. And as modalities, Miracle chooses precisely the practices prescribed by the situationists: comics (comic strip), the diversion of communication media, the film. Like the SI in his time, Benjamin Efrati nevertheless showed mistrust towards the collective production of the 20 th century “made up of movements that constantly try to replay dada”, when René Vienet proposed in 1967 to his comrades: “that we supplemented the expression of our dispute by means which dispense with any reference to the past. It is not, however, a question of abandoning forms (…) on the traditional terrain of going beyond philosophy, the making of art, and the abolition of politics; it is a question of completing the work of the review, where it is not yet operational. Because, to return to its origin, the intention of Benjamin Efrati is not so much to raise the masses against some injustices, but well to renew a semantics adapted to our environment. All his work is interested in the drift of language, therefore, in order to create a popular and warm welcome to the learned forms of the underground elite.

Olga Rozenblum
In short : In the distorted lessons of Benjamin Efrati, logical and linguistic errors constitute rules that are temporarily essential to the definition of the themes of his lectures. He launched the impulse of an alternative movement with his collective Miracle, in order to renew a semantics adapted to our environment.