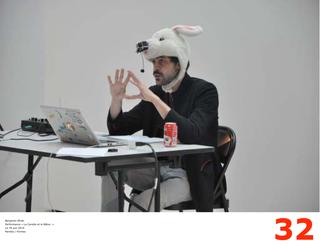 La Carotte et le Bâton (the carrot and the stick) is a performance by Benjamin Efrati, produced in 2014 as part of the Paroles / Formes festival organized by Nicolas Bourriaud at the Beaux-Arts of Paris in 2014.

Tracing the history of Fine Arts in Paris, Benjamin Efrati concludes that a large part of the artists who attended the Academy, between the 18th and the 20th century, were not particularly open to the artistic revolutions of their time. The highlight of this demonstration, the example of the anti-Dadaism demonstration of the 1910s on the Pont des Arts. What, then, is the promise that the Academy makes to these artists so that they castigate innovation so strongly and so constantly so that it is articulated in a historical way? This conference-performance recalls in its format the first significant actions such as Merjom Climacus, but it also announces by the choice of costumes the gestation of the Gnozo project.