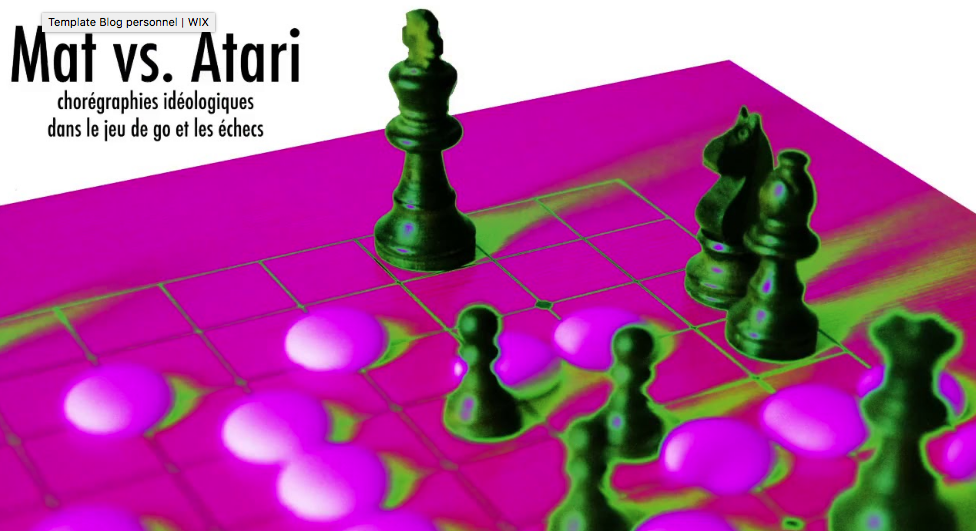 Mat vs Atari is a performance by Benjamin Efrati and Fabien Fromont. It was produced by FRAC Normandie Rouen on October 14th, 2018.

At the heart of the work, there is the idea that language is a framework for play and combat, which takes shape through the use of forms inspired by Chinese martial arts choreographies (Taiji, Qigong, Wushu), chess boards as well as gobans (wooden board used in the game of go). The performance develops the levels of the set design, which reflects the different theoretical levels of the discourse, including imaginary game rules invented by Benjamin Efrati et Marie B. Schneider.

Fabien Fromont practices Wushu and Taiji, which he learned in a school in  Wudang. He learned techniques like Bagua by following the teaching of  Sifu Yuan Xiu Gang in Wudang, China.

Since his meeting with Benjamin Efrati in 2012 , they have produced several experimental films mixing martial arts, music and performance.

Robota Ichimu is a duo composed of POL, Geneva composer and Benjamin Efrati. Together they offer this unctuous ambient to illustrate this Taiji course by Fabien Fromont.

In 2013, Benjamin Efrati participated in the 2014 Montrouge Salon. There, he presented some sort of meta-film of which he is the showrunner, the actor, the editor and the director. Explaining how different types of works overlap and respond to one another, he offers the visitor a prerecorded lecture-performance on his own production. The reason  he is not present himself is simple: he is practicing Taiji in Normandy.

The Taiji / lecture protocol on the beach where the American army initiated D-Day in june 1944 was the occasion of making another Interconference short.

Here is the film made from the performance Mat vs Atari at the FRAC Normandie Rouen on October 14, 2018.

Considered as practices in their own right, play and combat give rise to a discipline of body and mind which elevates them to the rank of artistic practices. It is then a question of exploiting this metaphorical scope of martial arts and strategy games in order to account for the way in which beliefs, through memory and language, confront and compose each other. Indeed, beliefs are psychological events
complex, involving both the conscience of the individual and the culture in which they are embedded. The processes through which beliefs evolve can therefore
subject to theoretical modeling.

The purpose of the performance is therefore to sketch a comparison between several models of interaction between beliefs, bringing out similarities between several discourses, several approaches, several distinct theories from the history of art and the history of the philosophy. Among these models, there is on the one hand the pragmatic philosophy of William James, which clearly explains how new beliefs can be integrated into a given belief stock. On the other, the pragmatic aesthetic of Marcel Duchamp, who by developing conceptual art breaks with tradition which assimilates the arts with the senses, mainly the visual sense, giving priority to the sense or the meaning of the elements of a work on the virtuosity of the imitation of an object or a complex set of forms. Marcel Duchamp could well be considered a pragmatic thinker, not only by the attention he pays to the conditions of possibility of the emergence of a particular meaning.

Likewise, Georges Perec, rarely mentioned in the history of art as he marked that of literature, constitutes an essential landmark in this picture. The latter claims in his work to develop gymnastics of the analytical mind through the fusion between the registers of fiction and autobiography, but also in his avowed intention to “saturate all areas of writing”. Art – of which literature is an example among others – is for Perec as for Duchamp a game on the scale of a lifetime. Perec and Duchamp, both known for the concepts they forged, have rarely been brought together.

One of the performance methods is to make the infra-thin of Duchamp, who tends to give an account of the imperceptible, dialogue with the infra-ordinary of Perec, who seeks, by treating the everyday rather than the marvelous, to bring out the elusiveness of human experience. In contrast to Surrealism, which focuses on spectacular and sometimes grandiloquent processes, Duchamp and Perec play with the invisible, laying the foundations for an aesthetic sensitivity to come.

It is not surprising that the two men were obsessed with strategy games: the failures at Duchamp and the game of go at Perec had the function of surpassing the limits of the imagination, of taming the reason to reveal it the incredible beauty.