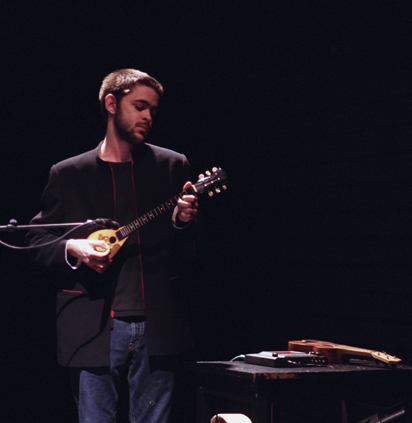 Merjom Climacus is a multimedia performance by Benjamin Efrati and Mario Amehou. It was presented at the Théâtre de l’Usine in Geneva  for the Dedans/Dehors Festival, curated by Myriam Kridi on June 7 and 8 2008.

The name “Merjom” is an assemblage of the letters in “Mario” and “Benjamin”. Climacus is one of  Søren Kierkegaard’s pen names. The performance is the fruit of a collaboration between two artists distant from a continent and a half, sharing the same vision.

Through a set of performative protocols, Benjamin Efrati compensates for the physical absence of Mario Amehou. He explains to the audience the concept of Significatogenesis, invented by Mario Amehou in 2007. While videos flash on the screen, Benjamin Efrati is about to demonstrate to the public that meaning doesn’t does not exist with an arsenal of electro-acoustic instruments. 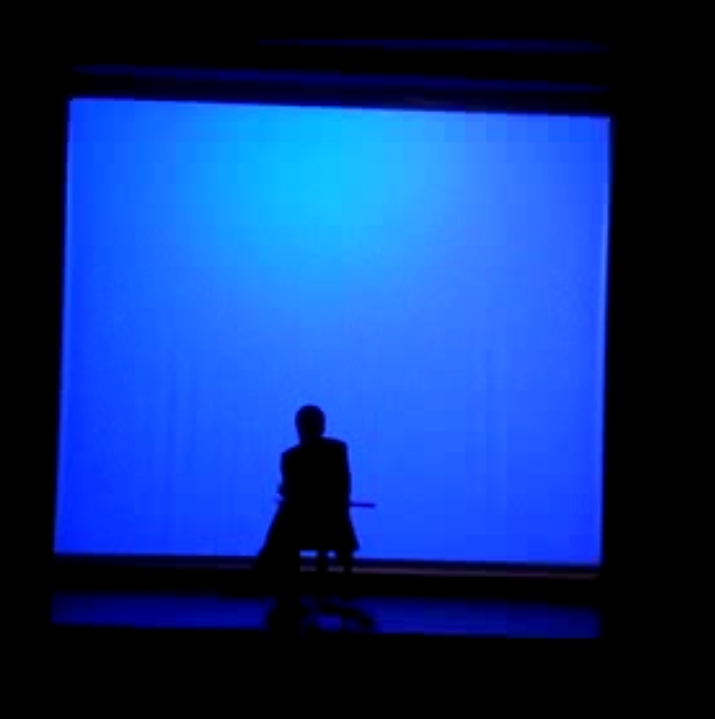 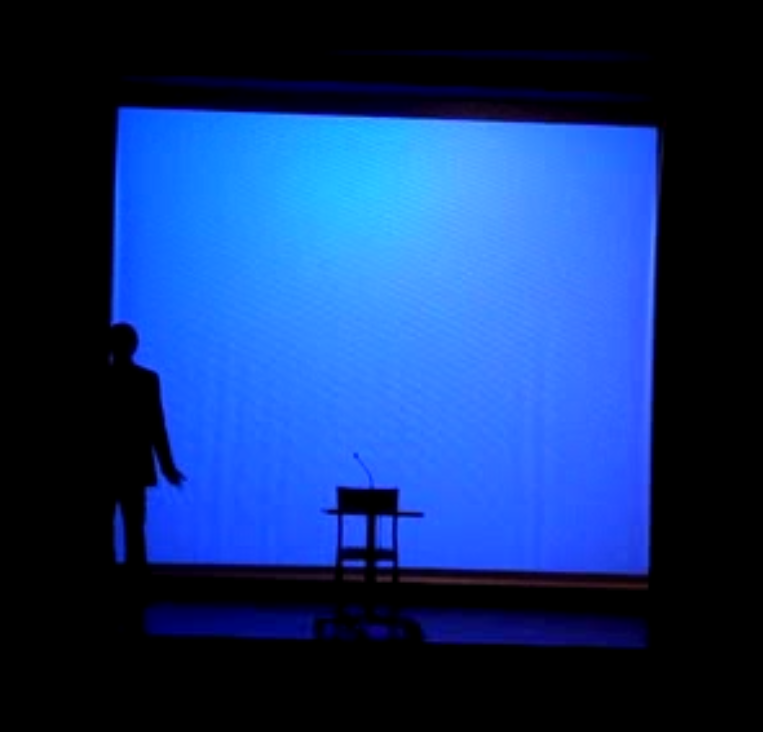 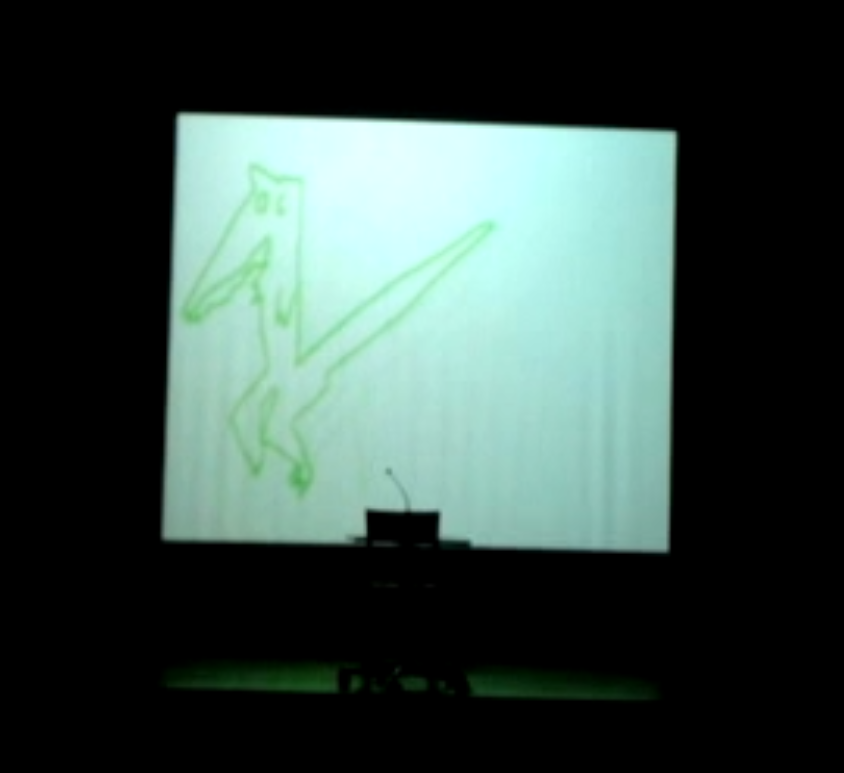 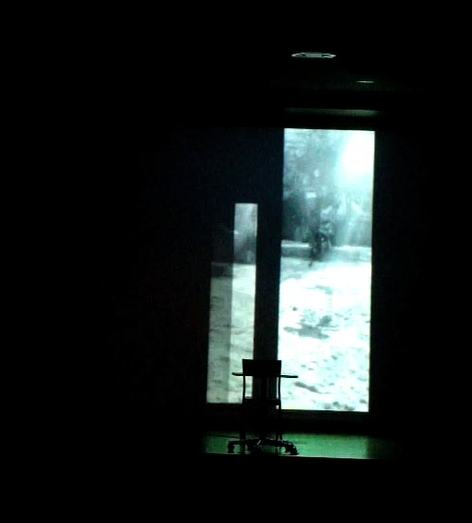 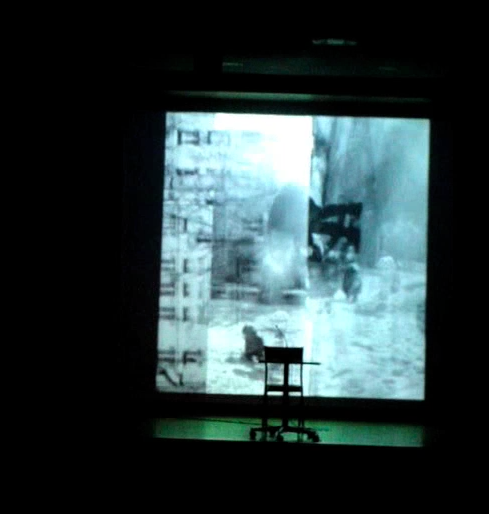 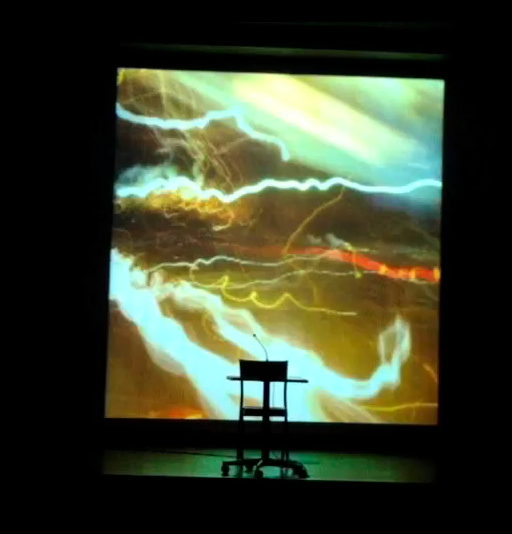 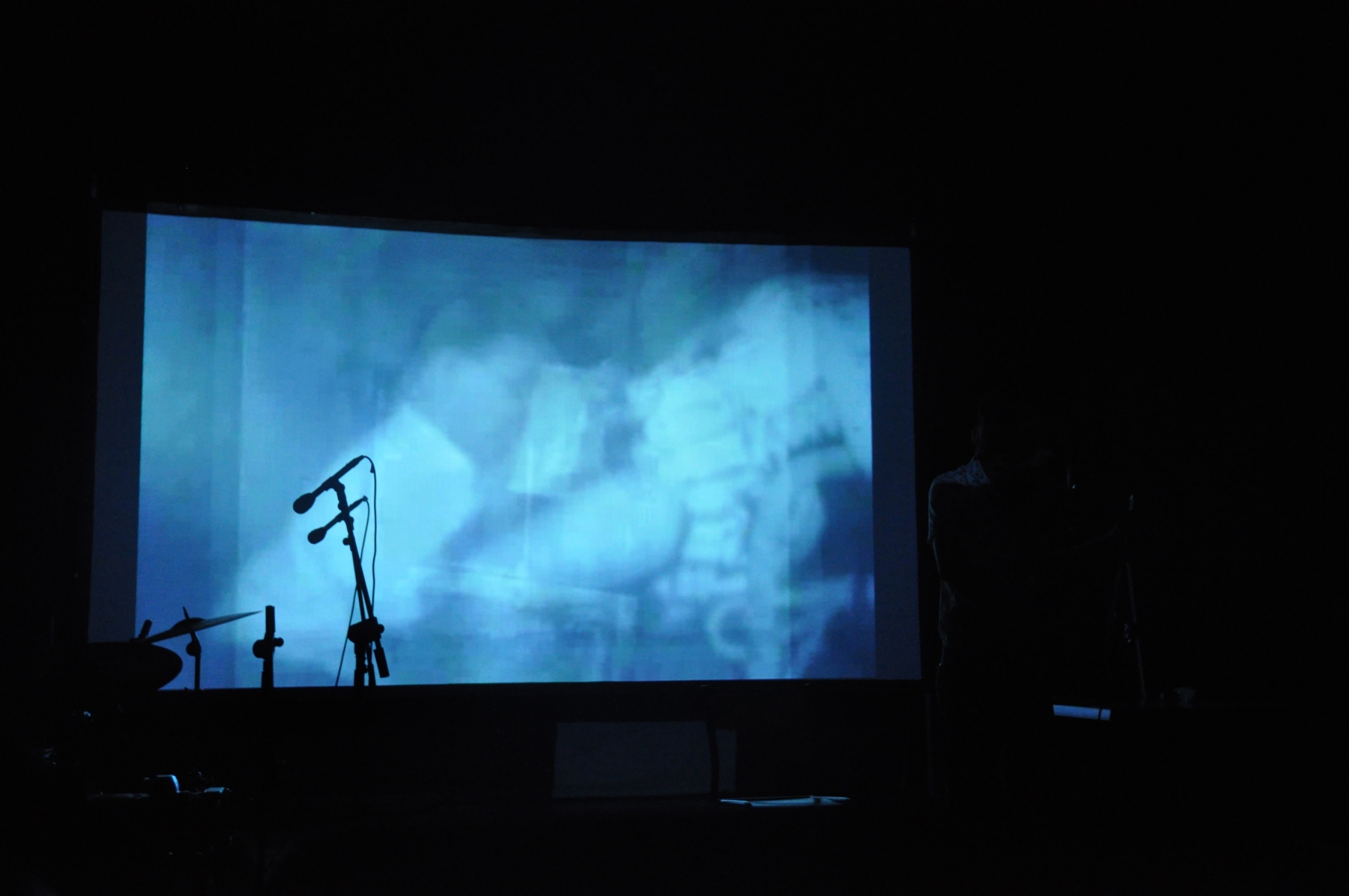 To illustrate his point, he explains the psychiatric concept of apophenia, connecting it to what Jung called synchronicity. He then comes to an uncompromising reassessment of the Freudian concept of rationalization. In doing so, mashed video sequences are triggered unexpectedly. Casually, between two sentences, Benjamin Efrati operates one of his sound machines, adding here and there a layer to the musical tidal wave he is building, consolidates it, destroys it and renews it like a castle of sound. This improvised approach draws the public’s attention to a central fact: none of this is planned, all the coincidences between image and music are constructed by the observer. Benjamin Efrati’s randomly edited film, composed of found footage from different sources, was assembled using a technique he defined as “free arrangement of informational content”. When a sentence seems to be metaphorically illustrated by the collision of a sound and an image, the audience witnesses nothing but methodically calibrated chance. And yet, whatever the reason, coincidental meetings keep abounding.

The demonstration is made: the artist does not exist, the meaning does not exist and the value attributed to a work of art is equal to the sum of its interpretations, which are none other than the production of a non-existent meaning by a consciousness that cannot bear to live without it. The crux of the problem is therefore this tendency for human beings to move towards what seems to make sense, calling into question only the most distant endings of their prejudices. Significatogenesis can therefore also be Scatogenesis; replacing an absence of meaning with a putrid signification amounts to creating waste in the form of meanings. But doesn’t the human mind create a lot more meaning than is verifiable? The immense field of Significance Ecology opens up, leading to the destruction of the boundaries between consciousness and the outside world and to Parsimonious Significatogenesis. It should be noted, in the Significatogenic pantheon, the god Rashalah gives unstability-based processes an adaptivity which it refuses to normative-based ones .

Mario Amehou, Beninese author of science fiction and poetry born in 1986, meets Benjamin Efrati in Geneva, Switzerland, during the winter of 2001 Between 2006 and 2008, the two artists live in Lyon, France. At the time, they were working on the animated short film Kuki and on the development of the musical theater project Psychomachie. During this period, they were conducting a search of a new type : Youtube, Facebook, Wikipedia had just been born. These early cyber-surfers, initiated into the wonders of the Internet in the era of the TCP / IP protocol, were delighted by the growing quantity of first-hand information online, and more particularly by scientific publications in the fields of neuroscience and experimental psychology. Their quest started in 2002 and led them to the invention of Significatogenesis one evening in May 2007 on the Wilson bridge in the 3rd arrondissement of Lyon. Diverting them from their studies of Litterature and Philosophy, this quest brought them to the discovery of such phenomena as binaural recordings claiming to generate psychedelic experiences, the pseudo-scientific accounts of  a certain Claude Rifat‘s conscious dreams – aka Claude de Contrecoeur, though not to be confused with the French colonial officer of the same name – and eventually to delve into the writings of Albert Hoffman, Alexander & Ann Shulgin, Hunter S. Thompson and Terrence McKenna.

Benjamin Efrati later presented Significatogenesis in other performances in 2008, 2009, 2010, 2011  until the conference/short film Semiophilia, a performance involving a trip from Hungary to India in 2011.

The last presentation of Significatogenesis happened in 2017.

Calling psychoanalysis into question, neuroscience seemed to alert them : the triumph of Surrealism in the History of Art might have been hiding something all along. Indeed, the notion of “objective chance” developed by André Breton, which appears as obvious from a French Baccalaureate point of view, focuses on the unconscious. Typically, the chance-driven-objectifying walker is making himself available to the subconscious layers of his mind, and  generates non-intentional yet desired events which are too complex to predict or even imagine. Reality is woven like rabbits come out of the magician’s hat. Now, what becomes of dogmatic surrealism if we liquidate the unconscious? Surrealism is in this sense only an organ for the dissemination of psychoanalysis. Deprived of his favorite toy, André Breton appears as a nauseating preacher of freudian aesthetics. Deprived of scientific validation of its working hypothesis, Surrealism is no longer a revolutionary engine for the imagination, but rather an extremely developed symbolic capitalization method.

Surrealism assassinated, there remains only a group of individuals, devoted to their voluptuous and sincere attempts to go further than their predecessors. There would therefore be a Surrealism from above, and a Surrealism from outside. Antonin Artaud, Georges Bataille, Rachilde, Marcel Duchamp, Max Ernst, Hans Bellmer, Gherasim Luca, René Daumal, and Valentine de Saint-Point. Belonging to the latter, none of those defectors of modern thought were judged worthy to enter the Surrealist canon, which is a construction of André Breton rather than a historical account of the artistic experiments happening in Paris during the 1920s. We must clearly distinguish the research space shared by this generation of authors from the egotic project of a dogmatic Surrealism. Ghérasim Luca, in 1945, scolded André Breton for having had the impudence distorted Surrealism, which was quickly becoming just another chapter in the school breviaries and missals of the multicolored hussars of the Republic.

From this critical investigation of the ossification of artistic experimentation, Benjamin Efrati did his research topic throughout his Philosophy Master in Lyon. His two research dissertations, of 2008 and 2009 respectively, set the course for this counter-trial of art history through the mechanical action of the principle of scientific revolution. Dream, Imagination, Simulation explores the state of contemporary knowledge in the field of REM sleep and counterfactual thinking; Arts, Sciences, Languages ​​draws the conclusions of the paradigm shift in the study of dreams from the point of view of art history, arguing that André Breton capitalized most of the symbolic power of Surrealism from ‘an excess of zeal to do by what he calls an artistic revolution the propaganda of a concept now archaic, the unconscious.