Xenoxenixm is a project developed since fall, 2015 by Benjamin Efrati. 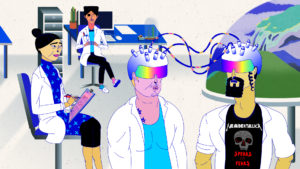 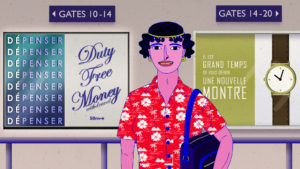 Are humans really a species? Humanism has had its time, the bar should now be set higher: humanity is a spectrum, and its limits are far from being clear. Are individuals really unique? Are they even autonomous entities? You cannot define your own algorithm, but that’s not because it is hidden or even hard to grasp. There is simply no individual algorithm: personalities are based on templates, made available socially. Although each of these templates does have an algorithm, no actual mental content can be described as the product of a particular algorithm. Here lies the mystery: technology promotes individuality but as a result it erases individual differences by calibrating individuals very meticulously. This process is often called “coersion”. 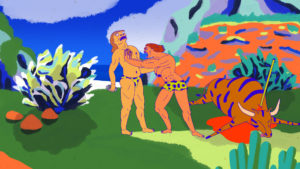 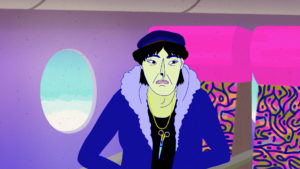 The Bible of XenoXenism is an interactive installation made in collaboration with Miracle. Diego Verastegui created the scientific graphic design, Wassim Halal and Laurent Clouet created te music. In order to render Professor Serizawa  and the world of the Venture Capital Ninja Pirates, a fighter-team of three hyper-talented animators from Hungary took the work in a different world: Petra Marjai, created the landscapes and backgrounds, Zsuzsana Kreif  created the characters, and Borbála Zétényi gave life and motion through animation. A dedicated website has been created to host information about XenoXenism, but all XenoXenist music is available online.

Thanks to Fragmenter’s engine, developed by Balazs Keszegh’s Long Title Productions,  a new tool has been created that enables its user to fragment their own identity: the XenoFragmenter, which is a collective self-portrait animating tool. This project has been developed for the Bible of XenoXenism, an interactive installation containing an animated short, an interactive sound installation and XenoFragmenter.

The Identity Fragmenter (also known as XenoFragmenter) is a program which enables the user to produce a representation of their evolutionary past. Most people carry Neanderthal DNA, which is an adaptive gene pool. XenoFragmenter lets you see yourself and invites you to set your face in front of a webcam in order to Neanderthalize you. The Sapiens mode enables fine adjustments of the face in front of the camera, and displays the faded version of the animation produced collectively in the installation.

Once you press the Neanderthalize button, you can capture the desired expression on your face: the one you want to work on. When the picture is taken, you can copy the XenoFeatures of your face and add  details, elements or accessories. If you wish to restart the drawing, you can erase your drawing; if you wish to confirm and add the drawing to the series of self-portraits made by others, confirm.

XenoFragmenter shows you three images of yourself: the one you are used to, the Neandethalized version, and your visual interpretation of that version. By fragmenting your identity between normative representation, uncanny reflection and personal interpretation, the user gets time to think about their evolutionary roots and the misinterpretation of humanity which produces the phenomenon of discrimination which can present itself, among other things, as racism or homophobia.

The test session has been held in Juranyi, Budapest (Hungary), under the vigilance of Zsuzsana Kreif and Balazs Turai.